Recently, I stepped into an online (Facebook) conversation wherein a group of users on a community page were sharing viewpoints about a fairly controversial topic: socialized medicine in the USA.  Frankly, when I say “sharing viewpoints,” the comments got a little heated, with people “talking” around each other and citing various surveys and studies to support their point of view.  Most of those commenting know each other and we all have to live in the same community. So all were polite, though insistent and a bit acerbic at times.

Some argued that a socialized system would make healthcare more accessible to all.  Others argued that, where such systems have been implemented, quality has been reduced or individuals needing help found themselves waiting for months for treatment—or both.  Then there was the topic of cost.  Nobody thought it would be cheap, but how much (and who pays) seemed a continuous circular argument.  In the end, neither side appeared to persuade the other; but the posts back and forth were quite entertaining, if sadly unproductive.

To refer back to the title of this blog, I was frustrated that there seemed to be no “common ground” between the two sides.  The Facebook experience, however, got me thinking that, while this particular conversation was focused on healthcare, the topic could have been about any general good or service in our societal system.  And I recalled an economic adage we’d used as university facility planners, related to another controversial topic: parking on campus.

We commonly explain the perennial complaint about campus parking as a triad of three choices within a zero-sum system.  Specifically, parking can be (1) plentiful, (2) convenient, or (3) cheap.  In the end, you can have two of the three, but not all three.  Think about it.  You can park outside your building, and there may be plenty of spaces available, but it won’t come cheap. Or you can have plentiful parking at a great price, but you’ll walk across campus to your office.  The alternatives are endless, with the goal being to strike a balance to satisfy as many as possible (or, as the pessimist in me likes to say, keeps everyone equally dissatisfied).

So, in an attempt to help find some common ground, I jumped-in and posted my own comment.  I said that, in my opinion, the economic triad of (1) convenience, (2) quality, and (3) low cost applies here. All three cannot coexist in reality; and the goal in the US is to strike a balance among the three. 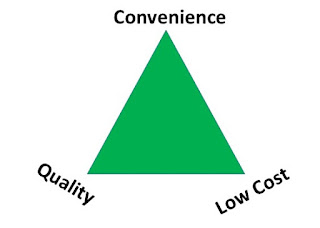 The access problem in America, I added, isn’t one of convenience. Quality healthcare is relatively convenient in most of the country. The problem is that convenience and quality come at a cost—one that is unaffordable for some. I don’t disagree with that. But in a socialized system, inexpensive healthcare becomes less convenient or of less quality. My preference would be incremental improvements to reduce cost without reducing quality or convenience.

Perhaps the hour was late and people had tired of the online conversation, but that was the last comment made on the thread. Other than a “like” on my comment posted by one participant, no additional comments graced the page.

I’d like to think that, perhaps, it's because we all began to realize that problems like access to quality healthcare aren’t easily solved through online arguments.  But the endless opinion streams on Facebook and Twitter remind me that many of us haven’t yet learned the lesson that, in order to reach common ground, you usually have to be willing to open your mind and walk purposefully toward the space between.