We often hear about first responders, military personnel and others who, without regard to their own safety, run headlong into danger to help others.  And yet we don't often get to see it happen.  But to witness it first-hand makes a very strong impression.  Such was the case last week.

My family and I were enjoying sun and surf at a resort on the US Atlantic coast.  Suddenly, the cry every beach-goer loathes to hear rang out across the sand: "Shark!" The news spread up and down the waterline as the lifeguards began calling people from the surf.  Those in the water ran to the beach. And the curious on the sand (me among them) ran to the water.  A large shark had been confirmed nearby and the lifeguards on the beach were tracking its movement along the coast, raising the alarm as needed along the way.  We watched intently, wondering if we'd see it go by. 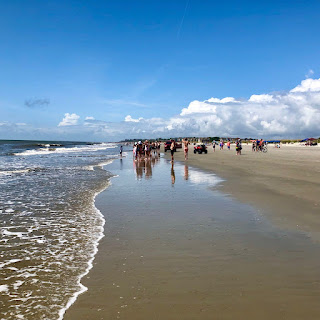 Then came another distressing call. This time we could see a swimmer nearly 100 yards off shore.  The individual appeared to be wearing a wet suit and carrying a fluorescent buoy--and seemed to be completely unaware of impending danger in the water. By this time a rescue patrol vehicle had arrived and a lifeguard grabbed a large surfboard and jumped into the surf, paddling strongly (but cautiously) across the path of the shark to the swimmer.  He escorted the swimmer back to shore and then stepped casually through the surf to the waiting vehicle. 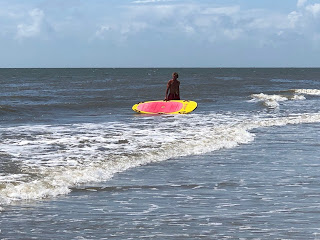 Such seeming heroics are all in a day's work, apparently, for those dedicated to the safety of others.  But for the rest of us, their actions are worthy of gratitude for being there when we need them.